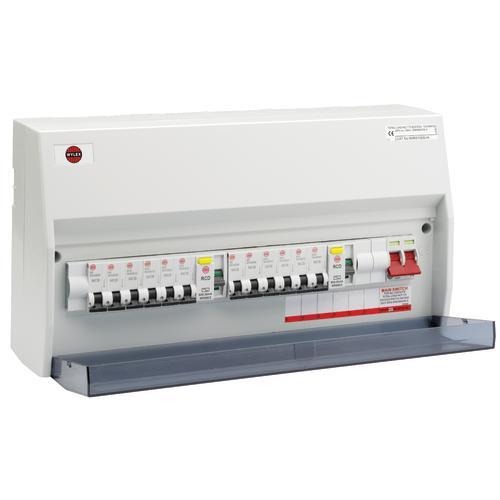 A Consumer Unit or fuse box is located between the electricity supply meter and the various electrical circuits within the house.

It is the key device within the house electrical system not only providing protection against overloaded circuits, causing a fire risk, but it also provides what is called Automatic Disconnection of Supply (ADS). ADS provides protection for people against injury from electrical shock.

The older fuse box or older consumer unit need not necessarily be replaced because it has re-wireable fuses, cartridge fuses or older type circuit breakers as these would have met the electrical regulations at the time they were installed. However there are some real advantages to having a modern Consumer Unit installed.

If an electrical fault were to occur within a property fitted with the older type fuse box several things would need to happen to re-establish the supply.

The latest types of consumer unit (sometimes referred to as a 17th Edition consumer unit) have what could be called resettable fuses, they are actually called Micro Circuit Breakers (MCBs) – so no need to rewire a fuse!

Also these later consumer units are designed to allow for split circuit loads, meaning it has two sections allowing for the division of wiring, for example;

This division of loads prevents a tripped section from plunging the whole house into darkness.

A real positive of the newer consumer units is that each of the two sections is protected by a Residual Current Device (RCD). RCDs provide additional protection through Automatic Disconnection of Supply (ADS) against electrical shock.

I install the latest and safest 17th Edition Consumer Units and upon completion, I issue you with a test certificate and register your installation with building control (a legal requirement).

It is recommended to have the existing electric circuits inspected prior to the installation of a new consumer unit, this is because inherent ageing of the circuits CAN, but not always, be masked by the older fuse boards, however the newer consumer units can highlight previously unknown issues, better to know beforehand than after the new consumer unit is installed.

Although one of the more involved jobs, with careful consideration and planning real benefits can be gained from upgrading your existing Fuse Box or Consumer Unit to the latest 17th edition type consumer unit.

If you have any questions or would like to talk to me please call 07810005032
If email is preferred, then click here to send me your message
Registered Office: True North Electrical Ltd, 2 Guildford Street, Chertsey, Surrey, KT16 9BQ Registered Number: 8667874 Registration: England and Wales